Bio of a Semen-loving Japanese Teacher

My introduction to Maki Hoshikawa was through her debut, 'The teacher who drinks semen.'  That was when I first encountered her literally bathing herself in semen before drinking it. In the face of bukkake where most women close their eyes and shut their mouths, why did she decide not only to take it in with slack-jawed grace followed by a heartfelt 'thank you', but do it as a full-fledged AV star? Her graceful acceptance of semen without batting an eye (which could ruin a shot) is something only a professional is capable of. For most AV stars, what happens in one shoot is sufficient, but the same cannot be said for Maki Hoshikawa. She takes it all with eyes wide open. Her serene gaze of want at the moment of ejaculation is no act, but the real deal of someone who loves semen.

She doesn't hold back that much about her previous employment and my work as an editor also sometimes goes hand-in-hand with casting where I've had the opportunity to have somewhat straightforward and frank conversations with her. Weekend shoots were occasionally met with bouts of exhaustion due to long days at work the day before. Her employment as a teacher reminded me of nurses working part-time in AV making similar complaints.

Maki Hoshikawa's got a sharp memory. She'll have your name memorized even after only one encounter. I think this is a trend with women in her field. I also think their jobs also end up stressing them out and they frequently vocalize their woes when saying things such as, “My students do not listen to me and it's making me furious!” and “What's this I hear about how heavenly being a nurse is? My patients are all selfish...but when they do thank me, it does feel...” Some nurses may say they don't believe it, but there are some who give their patients 'extra help'. After all, some patients in for the long time end up storing too much of it. I'm sure it's mostly done via their hands, but one can wonder. There almost certainly have been covert relationships between nurses and their discharged patients after these 'extra help' sessions. It's these thoughts that attract me to Maki Hoshikawa and her love of semen.

It was about half a year after hearing about her that I had the opportunity to watch her debut, 'Swallows Secret Hideout'. It consisted of Maki Hoshikawa in a traditional teacher's apron using a whistle to summon a group of anonymous male actors. Once assembled, she goes down the row of nude men pumping, stroking, sucking, and more until they erupt and she concludes by wringing them all dry. She went one step further with her irrumatio production featuring countless rounds of irrumatio complete with endless drool and deep-throating. She even took the time to open her mouth wide to show the camera a closeup of fresh semen before gulping it down.

It's amazing seeing someone like Maki Hoshikawa drink up all that semen with such a happy and outgoing demeanor. Does she really love it that much? I sure would love to know.

Written by Mitsuhiko Asami
Mitsuhiko Asami is a fan of traditional AV via his previous position as an editor of an adult magazine and now is somewhat of a hikikomori eking out a living as a freelance writer. 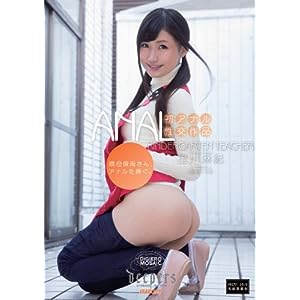 (Translator's note: Some women love semen, some women love semen when it erupts during an explosive orgasm, and some want to wring and pump every last drop of it post-extremis before gulping it down. Mitsuhiko's bio on Maki Hoshikawa describes her as a combination of all three.)