The Compensated Dating of Health Services via Snack Bars Part 3

The true story of a Japanese woman who began working as a schoolgirl on compensated dating sites and eventually found her life calling at a fashion health.

A-ko enjoys being compassionate and this doesn't apply just to her chosen profession. Her customers enjoy how well she treats them and many frequently return and directly ask for her in a process called shimei. “I'm so happy that customers keep on selecting me instead of so many other women. I can't imagine myself having the courage to do that,” remarks A-ko. She continues on by noting how she doesn't fake anything with her clients. This may be her life's calling.

Working at a Japanese fashion health for even just a few hours a day is more than enough to life comfortably off of. As to why she continues to work there, her answer was succinct: “I don't like being frugal.”

As unbelievable as it may sound, A-ko is not a slave to fashion. Her body is not covered head to toe in brand name attire. In fact, she's looks pretty much normal. She also is not continuing her occupation as a fashion health 'masseuse' to support the lifestyle of an extravagant Japanese host (Translator's note: A good percentage of women who frequent Japanese host clubs also work in the industry. It's a vicious cycle for some who start out as simple cabaret club hostesses, but end up working at more sexually-oriented businesses that pay more in order to support their expensive habit. Champagne calls in host clubs—that 5 minutes of Great Gatsby-like bedizened decadence run several hundred to several thousand dollars (USD) depending on drink selection!).

It's hard to see how she does not like saving money as even buying inexpensive things at a convenience store along with opting to take a taxi home after a night of entertainment leaves her with feelings of guilt. Her rent at 80,000 yen (approximately $800USD) a month may seem hard to maintain with a yearly income of 2,000,000 yen (approximately $20,000USD) which is the average for someone her age. Thus, her decision to remain employed at a fashion health.

Still, why did A-ko decide to even enter this line of work in the first place? Her answer was the same as before: “because my parents paid for my schooling.” Not working is something A-ko cannot see herself doing. There's pride and face to consider.

Lastly, there's the issue of sex. Her first encounters with it were during her enjo kousai days and back then, it wasn't something she enjoyed, but did not hate either. Nowadays, sex is something that A-ko loves. It didn't come right away. Rather, her first truly enjoyable experience was not that long ago soon after she graduated from college. Amongst her group of 10 sex friends, one in particular really knew how to turn it into a truly orgasmic experience. In fact, he was a customer from work and like most customers, he was in his 30's or 40's. This was the age range that A-ko found herself gravitating towards. “I never thought I'd go all the way with someone and truly enjoy it when money was not involved.”

Since then, she has cut the number of sex friends down by a margin of 3 and still works at a fashion health. It's something she enjoys and sees herself doing with no end in sight. I hope 10 years from now she is still as happy as she is now living a lifestyle all of her own making. 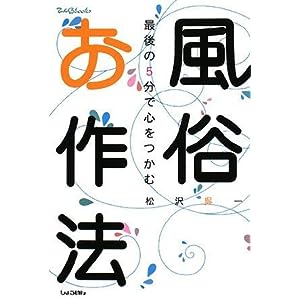 Men's Cyzo recommends this book (Japanese only) to readers of this article.

(Translator's note: More power to A-ko if she is doing something she truly enjoys. The pay at a fashion health is great and even a few hours of work several times a week during her twenties can make for a very pleasant nest egg in the future. This is a common strategy many hostesses—the one's who don't fall into the trap of spending it all on hosts—employ: work hard now and make enough to do whatever you want as your own boss in the future.)